This last weekend, I went to New Mexico to visit a couple of new places, a couple of places I've been before, and to take a few photographs.

Friday, April 24th, I drove to the ghost town of Lake Valley, which is north of Deming, NM on route 27. This town started when there was a large silver discovery and people came to mine the silver. The silver soon ran out and then they mined manganese. The town has a few old houses, an old gas station, and a schoolhouse that doubled as the town hall. The place is owned by the Bureau of Land Management and there is a caretaker on site. The school house has been restored and is open 10AM to 4 PM Thursday-Monday. I got there about 3 PM and went in to see and photograph the schoolhouse which is the only building you can go inside of, and then spent a couple of hours wandering around photographing buildings, mine workings, water tanks and old cars. Near sunset, I went over to the Lake Valley cemetery and took a few photographs. Here is a photo of the townsite as seen from the cemetery which is on a nearby hill: 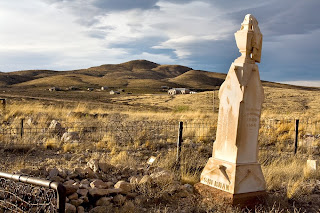 I spent that night in the town of Elephant Butte which is a suburb of Truth or Consequences, NM. The next day I took the back roads from TorC down to Las Cruces. This route took me through agricultural areas and to a couple of state parks. It was a pleasant drive. From Las Cruces, I drove to Deming and then up past City of Rocks to the Mimbres valley. I drove up the valley to the Lake Roberts area and then to Silver City.

The next morning I drove down to Lordsburg, NM to take some photos, met and talked to three different folks about the history of Lordsburg and what it is like to live there. Then I drove south of town to the ghost town of Shakespeare where they were having their "living history" day which include re-enactments of shoot-outs and firing a cannon and a number of folks dressed up in period clothes. I photographed various things including a shoot-out that was billed in the newspapers of the time as "Four Dead in Five Minutes". Here is a photo of a guy firing a revolver during the gun fight: 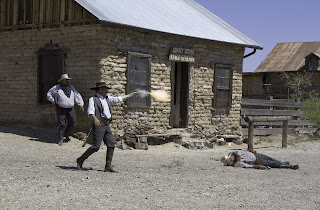 A couple of local explorations

This last Saturday, April 11 was a stormy day. After I finished doing my taxes (yes, I procrastinate!) I decided to wonder down to San Xavier to see how far they've gotten with the restoration and to take a couple of photos with nice clouds in the background and perhaps a rainbow. I saw a rainbow on the way down but did not catch one over the mission. The west tower of the church has been restored, the east tower needs restoration. The work done so far is beautifully done as can be seen in this photo: 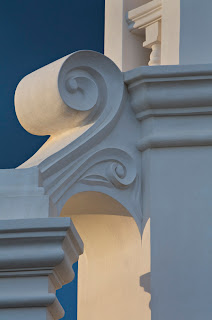 I took a few photos and am happy with a few of them.

The next day, Easter, I decided to drive up to Globe to see what I could find to photograph. I figured there would still be some clouds around and Globe-Miami is on US 60 so perhaps there would be some vintage motel signs similar the the ones I found along the same road near Wickenburg last week. I had also read that they now have a steam train in Globe that takes riders out the the Apache Casino so I thought I'd check that out. It was an interesting outing, they weren't running the steam engine on the train because it was being fixed but I did see the train and the steam engine. I wondered around the area and took a few photos, I thought this image was a good juxtaposition of the image of Geronimo and the sign for the El Ray Motel: 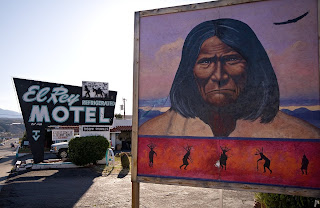 Posted by Dyer Lytle at 3:16 PM No comments:

This last weekend, I had planned a trip to Flagstaff for a meeting at the USGS. However, when I talked to the folks up there last week they said they weren't ready for a meeting yet. Bummer! I always enjoy visiting Flagstaff and this was a chance to make the trip into a photo trip. I decided to do part of the trip anyway so on Saturday, I drove up to Wickenburg by way of Gila Bend to avoid Phoenix and then on Sunday drove from there up to Prescott and then around through Payson and home, avoiding Phoenix again! Much of the trip I was following the railroad, I picked it up in Salome, AZ and followed it to as far as Skull Valley, AZ. Generally, the landscape was non-spectacular, just desert and small hills and mountains. What I found interesting were the small towns along the way that probably grew because of the railroad but are now shrinking because the train no longer stops and the interstate highways have taken most of the automobile traffic. Each small town has a character of its own, very few chain stores to be found. I particularly enjoyed some of the old motel signs, many of which are in disrepair but are still charming. I found this motel in Aguila, AZ, I think some of the neon is still working: 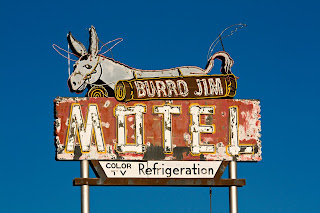 Driving up old highway 80 from Gila Bend to Hassayampa, I found that Phoenix is starting to leak out west of highway 85. This is really the town of Buckeye, but I consider it to be the western edge of the human infestation called Phoenix. I found this development getting started which has a water skiing lake surrounded by lots for sale. I talked to an owner of one of the lots and it turns out he is from California and bought his lot so he can build a second home to get away from the crowds and go water skiing. Of course, he is just becoming part of the same problem in Arizona! Here is the sign for the place: 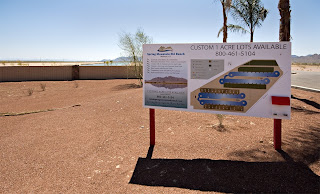 Along the way north of Cotton Center, where Komatke road joins the highway, I crossed the Gila river and was glad to see water in the river. There is a dam there and pumps that take water out of the river for the various wheat and cotton fields that need to be irrigated. This is also a favorite spot for quite a few water foul and a few fishermen. I also crossed the Hassayampa river a couple of times but never saw any water in it. Here are some herons at the Gila dam: 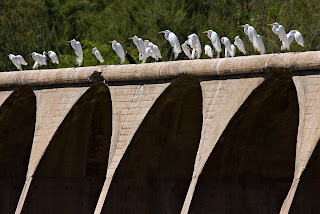 More about this trip in my next blog post.
Posted by Dyer Lytle at 9:08 AM No comments:

Dyer Lytle
I am a software engineer for the Lunar and Planetary Laboratory at the University of Arizona in Tucson. Currently, I work with the team operating the Visual and Infrared Mapping Spectrometer (VIMS) on the Cassini Spacecraft which is in orbit around the planet Saturn.